Dual Planet is a new Melbourne-based record label established in 2013 by Rocket Distribution and managed by James Pianta and Mike Lenton. Describing their new venture as “dedicated to exploring the electronic otherworlds”, Dual Planet is primarily focussed on electronic recordings.

The first four releases from the label include the reissue of Steve Maxwell Von Braund’s 1975 Monster Planet and Sunday Night at the Total Theatre (live recording from duo Cybotron), plus two albums from Italian library composer/musician Tiesco. Based on these releases one may assume the label is all about vintage electronics? Don’t be fooled – Dual Planet are developing a contemporary side to their label, hence the ‘Dual’ reference in the label name. The Dual Planet team are already in the studio working on new albums/projects to be announced soon.

Diggin’ Melbourne spoke with James Pianta about the new label, what’s coming in 2014 and what he’s been diggin’. Read the interview here

Dual Planet are also  starting a joint label with the UK reissue label Finders Keepers. The first LP release is due in a few weeks. Watch this space.

Listed below are a selection of Dual Planet releases. For the latest info and releases visit the Dual Planet website.

Welcome to Monster Planet, Steve Maxwell Von Braund’s 1975 classic of Australian proto-electronica, a big blast of Kosmische dust, Korgs working overtime…Arguably, the first fully electronic Australian album, Monster Planet is a solo recording from one half of the infamous Australian electronic duo, Cybotron. Von Braund recorded this pre Cybotron album upon his 1973 return to Australia after soaking up the sounds of psychedelic 60s London where he mingled with Hawkwind, The Soft Machine and Graham Bond. Circling between that classic Krautrock motorik beat, and a different, almost jazz-y kind of fluidity, Von Braund combined his London experience with his love of German Head music such as Amon Duul, Popol Vuh and Ash Ra Temple, to create a mutant electronic masterpiece. Praised by Tangerine Dream, and lauded by legions of Krautrock collectors, Monster Planet is an early example of visionary Australian experimentation. Presented as an exact replica of the rare 1975 Clear Light Of Jupiter LP, remastered from the original master tapes and complete with liner notes and rare photos. Monster Planet is taste of what was to come and flourish with further cosmic experiments under the Cyboton name. 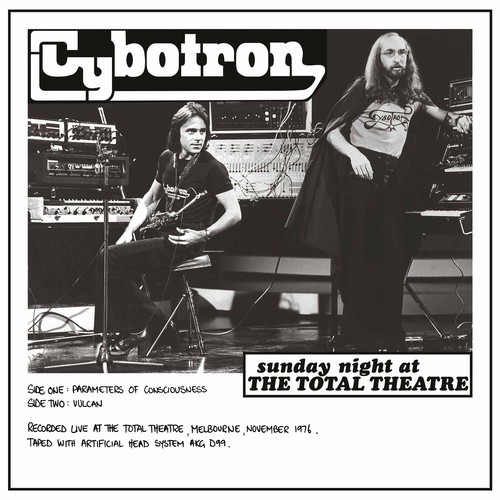 Released alongside the reissue of Steve Maxwell Von Braund’s milestone Australian kosmische classic, Monster Planet, the Dual Planet label offers you another taste of the antipodean cosmic trip. This time Von Braund had re-grouped as the electronic duo, Cybotron. Most collectors are familiar that the legendary Cybrotron released three cosmic classics at the tail end of the 70s and early 80s. Cybotron (1976), Colossus (1978) and Implosion (1980), but most are unaware of an unreleased live recording that was also issued on vinyl in 1976. The staggeringly rich and hypnotic Saturday Night Live At The Total Theatre. A live set of ecstatic moog ragas reminiscent of both the heavyweight glory of Popol Vuh (imagine a live Aguirre teased out unto eternity) and the blissful endless-nameless sunblindness of Ash Ra Tempel. Presented as a replica of the rare private press with DIY artwork, Saturday Night Live At The Total Theatre is a rare insight of what was lurking undocumented in the Australian electronic otherworld.

The last time we checked in with Italian musician Teisco aka Rimauri, aka Marco Melchiori, was quite possibly also the first time many of you checked in with this most singular of characters. For The Roundtable imprint’s reissue of his blasted ‘70s Italian library classic, Tuscan Castle & Country Seat, managed to be both a blast of fresh air for the library and soundtrack palate, and a defining moment in early 21st century reissue culture. But Tuscan Castle only tells part of the story. Enter Musiche De Teisco, a compilation of mind bending electronics drawing from three obscure library albums: firstly, the Cosmic classic, Fly In 5° Dimensione / Plane Beta Ø, the freakish malnutritioned Moog-scapes of Inchiesta Sul Mezzogiorno, and finally, the aerated synth drone of Dossier Special. Think the power and mystery of the most sainted of Krautrock and Cosmic sides – Popol Vuh, Sand, Tangerine Dream, Klaus Schulze, Conrad Schnitzler etc sitting alongside jerry-rigged basement Moog experiments. Experience further exploration into the strange and highly distinct world of this intriguing library music character.

Issued alongside the compilation Musiche de Teisco, the Dual Planet label offers another piece of the mysterious cosmic puzzle of electronic library maverick Teisco. Fast forward several years to D.O.C, a library recording released under his new tag Rimauri, Here, you can hear how Teisco / Rimauri has refined the synthetic vision he started to work on with his earlier recording Dossier Special. This set conjures up instant thoughts of vintage computer game soundtracks or even a parallel with that nearly-forgotten masterpiece of European electronica, Nuno Canavarro’s Plux Quba, could be drawn. While sitting closer to the conventions of ‘80s library music, there’s always something in there that doesn’t quite make sense, whether it’s the weirdness of the mix, the interjection of unexpected patterns or phrases or simply the abstract electronic moods and atmospheres unheard anywhere else in the library music realm. D.O.C. is a charming ride into the pop heart of Teisco’s skewed musical vision.

Content for this page is sourced from the Dual Planet website. © Dual Planet 2013
Published with the permission of Dual Planet